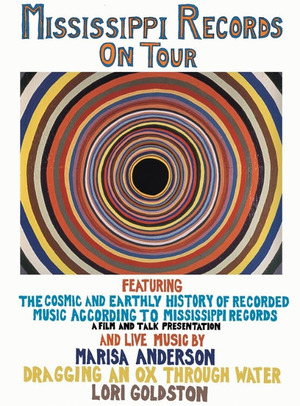 A once in a blue moon showcase that features a brand new live film/talk/slide show presentation by Eric Isaacson (Mississippi Records label boss and store owner) plus THREE live acts, all of whom have released records on the Mississippi Record label.

This live presentation is a combination of film, slide show, lecture and soundscape. It instinctively and idiosyncratically illustrates a entire history of recorded music (focusing on Eric’s patch, North America!), from the birth of the first star in the universe all the way to the dark ages of the 1980’s.

The ultimate intention of this travelling exhibition is to give the audience a sense of wonder; that anything is possible and art is worth doing. Tonally, the presentation navigates into the outer reaches, bypassing academic stuffiness in favour of entertainment value and immediacy. All materials will be from Mississippi Records vast and seldom seen archive of film, music and art.

This whirlwind 90 minute sound and visual representation will attempt to sum up as many important points in the evolution of recorded music that can be done in such a short amount of time.

Mississippi Records has produced over 280 releases on LP & cassette tape that crisscross’s borders, digging up joyous albums, singles and unheard songs and sounds that where being left under the bed, out in the shed and unloved by most record companies. They have managed to do this on a shoestring budget, without ever advertising or engaging in promotion of any kind & distributing only through DIY avenues. MARISA ANDERSON
Living in Portland Oregon, Marisa Anderson is a composer, guitarist and multi-instrumentalist who works both solo and in beautiful tandem. Inspired by Delta blues, West African guitar, country and western radio from the 60′s and 70′s, gospel, noise, rhythms, cycles, mortality, and praise. Featuring an impressive 12 improvisations for guitar and lap steel Marisa has released two albums on Mississippi. In the past two years, Anderson’s music has landed her slots with artists including Godspeed You! Black Emperor, The Devil Makes 3 and Sharon Van Etten.
http://marisaandersonmusic.com/ LORI GOLDSTON
Based in Seattle, Lori Goldston is a cellist with an emotional and magic touch. Classically trained and rigorously de-trained, possessor of a restless, semi-feral spirit, Lori Goldston is a cellist, composer, improvisor, producer, writer and teacher . Her voice as a cellist, amplified or acoustic is full, textured, committed and original.
Collaborations famously include being thrown in the dark end with Nirvana and enjoying the songs of David Byrne and Cat Power. Lori also co-founded Black Cat Orchestra and has been key to Earth live shows. She has received commissions to do live scores for several silent films.
https://www.youtube.com/watch?v=pFDL6dJaTAM